The collection that our art class brought in was an ocean of blue. With all these items that we're brought in we use and do in our daily lives. The blue vans shoe is something everyone wears to get through the day, maybe not that type of show but everyone has a shoes on their feet. To go deeper then just a shoe to get you from place to place and to keep your feet warm and unharmed a shoe is a way of life. "Walk in my shoes and understand what I've been through," is one of the famous phrases a lot of artist use in their songs. We walk on this planet to get through struggles, good items, and dreams and no one will ever understand what you've been through unless they walked in your shoes. There are many other items in this collage of blue that we use in life.
The artist Portia Munson does similar artwork like the collage our class has created with our personal home items. Portia's art work is the pink collage of multiple items that interest her. Unlike ours where students were unsure what to bring so we brought in simiple items, Portia used more thought out items that all have a meaning to her in some way. 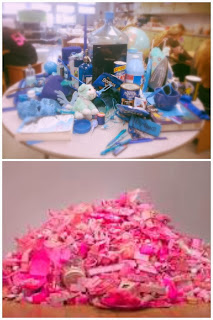 Posted by Unknown at 8:36 PM No comments: 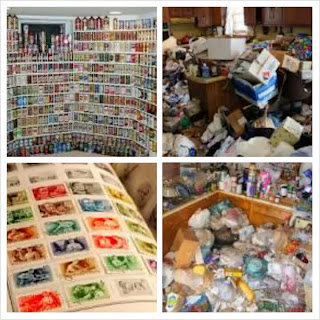 Collecting Vs Hoarding could go in many ways. Some people may agrue they are the samesamething because both are an obession over a certain item or items. But, these are hos the definitions differ. Collecting is to bring together in a group or mass; gather; to accumulate as a hobby or for study. Hoarding is an excessive collection of items, along with the knability to discard them. My veiws on these two things are very similar. i look at these things as the same, these both are diseases of an obession but one is just stronger than the other. With collecting you may do it as a hobby but along in time you will end up getting obsessed with that hobby. With hoarding something either tragic happened or you were born with the disease to collect anything you gather in life. Hoarding is just an extreme version of collecting.
Posted by Unknown at 6:55 PM No comments: 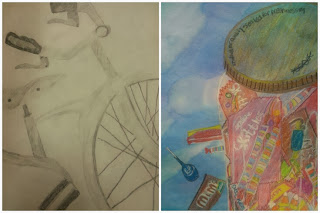 With these two projects there was a big difference between them both. The bike drawing was a rather darker drawing considering we didnt use any colors. The bike drawing was also extremley hard for me to do considering on how much we have to do; shading and drawing such a big item to draw. The candy drawing was the easiest drawing for me draw we used lots of colors and i actually liked how my drawing turned out. These two drawings have such a big difference on the mind set i was in with each one of them and how the one was darker and other was ligther.
Posted by Unknown at 10:36 AM No comments:

This project was one of my favorites, if anything it was so must easier and relaxing than the bike drawing. In this project we were told to draw a jar of candy and the candy around the jar. At first I put too much thought into this project and my frustration started to compel me but once I gathered myself I started to free hand the jar which was extremely simple.

After I drew the jar I took a shot into drawing the candy that surrounded the jar which wasn't as hard as I thought it would be and after that I drew the candy inside. When it was time to color I was extremely timid because the paper we were drawing/coloring on was a paper we created with water color and whatever we wanted to create. My paper was blue and purple, so I was stuck debating how this will turn out with all the colors. As I started shading my colors that I chose blended extremely well with the color in the background so everything turned out very well. To make the candy inside the jar look as if it was actually inside the jar I took the white colored pencil and lightly shaded the jar and all the candies inside of it to make it look like they were behind a glass.

I was very please with how my art work turned out and I was surprised at my abilities to tackle this project down and have it come out actually good...or well in my eyes. I've learned not to judge myself before I even try the project out because this wasn't as hard as I thought it would be and it came out so well and I can actually say I am proud of myself. 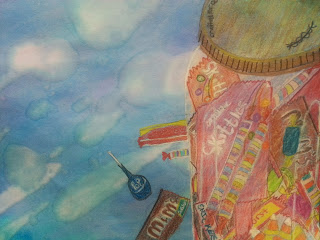 Posted by Unknown at 4:59 PM No comments: 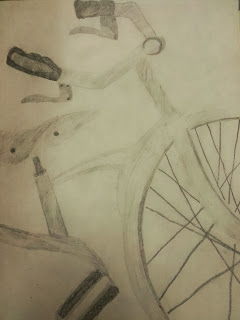 In this project we were told you take a picture of an old rusty bike and re create the picture on a sheet of paper. With the bike picture though we had to blow it up and let it take up the whole paper and shade it in. At first I thought this would be a piece of cake but while I started to draw the bike I realized how much of a struggle this piece was, which was frustrating and surprising.

The bike took me a lot of time and while drawing it I made a resemblance to how it's kind of broken down and out of place. As you can see the bike looks a little un-done but that's not the laziness and frustration that I have as a person, that was my touch I wanted to show in the bike drawing. So, I made the look done with the handle bars and down but around the bike around the back tire that's when my thought came into place. Once this thought came and was down on paper I started to shade the bike, which wasn't as hard as I thought it would be, if anything it was my favorite part. In the end the bike did come together in my own way.

At the end of this project I've learned that the things you see in front of you aren't as easy to put down on paper. But, you can not let your frustration over power you, you still have to pull yourself together and always remember to put a part of your thought and what you see behind the picture you are drawing in the picture that you are creating.
Posted by Unknown at 10:33 AM No comments:

Hello everyone thank you for checking out my blog!

My name is Nadine Kibalo- Carpenter I am a very creative person throughout the way I dress and act. I don't really play sports or anything around that nature, I'm mostly into showing off my style I have strectched ear lobes, piercings, and tattoos. Its not a way to scare people off, it's a way to show yourself and who you are.

This year in the Haddon Township Creative Arts class I am excited to learn all the activities that are going to shown to us. This is an extremely creative class and we can show who we really are throughout our artwork.
Posted by Unknown at 10:32 AM No comments: